This is my speech from the closing plenary of Ideas for Freedom, the political conference organised by Workers’ Liberty. This year’s conference focused on the theme of Changing Labour, Changing Politics.

Hi, my name is Pete Campbell. I am a supporter of Workers Liberty, and a member of the Labour Party, Unite and the British Medical Association. I have spent the last year fighting, striking and moving the Government. But more about that in a few minutes.

For those of you that haven’t already realised this session is about why you should join Workers’ Liberty, be a socialist and work with us to create a better world.

I became a socialist off the back of the student movement in 2010. I was a first year graduate entry medical student and I realised that a door which had been open for me. Was being slammed shut for future generations. I wouldn’t have been a medical student under £9000 fees. It would have been too expensive. I would not be a doctor today.

Three times on my way to entering medical school I was told I would never make it by teachers and lecturers. I now realise that we have an education system set up to fail it’s students, and a University system designed to exclude the poorest sections of society.

As the student movement faded, the campaign against the Health and Social Care Act began to emerge. I could not believe the amount of effort, energy and work, that was ignored by the establishment.

I think there is a difficult truth that we must accept, and in fact embrace. Being a socialist is hard work. It is tiring, trying work.

I support Workers’ Liberty because I know that I could not continue this work on my own. As I was leaving the student movement I knew that activism would no longer be on my doorstep. If I wanted to stay engaged I need to be coordinated, part of something bigger.

Events like this weekend show the importance of education within our movement, Workers’ Liberty is fantastic for this.

2015 was a strange year, the Conservative Party won a general election, despite five years of devastating austerity. Jeremy Corbyn arose as a credible candidate to lead the Labour Party and then went on to win a landslide victory. And then, when I thought the year couldn’t get any stranger the BMA turned itself into a fighting trade union and went to war with the government.

I’m not going to go through every twist and turn. But I want to highlight a couple of important things for me. Trying to get students and workers to care about the health and social care act was a battle. One I lost on a regular basis. But when I sat in a meeting looking for JDC Reps I was sat next to a junior doctor I had not seen for 3 years. Since I called an NHS Demo and 8 people turned up. “Stand” she told me, you would do a really good job. 2 weeks later I was sitting in a JDC meeting. We have not had time to look back. But I guarantee you that those long hard hours of work, matter. The hours of long hard work you are doing, matter. In ways that we often will not understand or fully appreciate.

Our action, regardless of where it goes from here, has already saved lives, protected terms and conditions, highlighted the gender inequality and discrimination inherent in this contract. Our action continues, the limit of our ambitions not yet set.

There are parallels with the fight within the Labour Party. Which I am coming on to next. But before we do, I just want to leave you with the most important message from the dispute. The only limit to what we can achieve is ourselves, is our class.

6 months ago I couldn’t get the BMA to make a placard. Today we have taken 8 days of industrial action and won significant concessions from a first year Tory government. If the BMA can do this, imagine the labour movement pushing together in one direction.

The Labour Movement is in a period of flux, the move to leave the European Union brings, fear, confusion and crisis, in which capitalism and right wing ideologies thrive.

But it is also a space for opportunity, for us to demand the trade union and labour movement stands up for our rights.

I want to talk quickly about three women. Ella Thorp, Student Nurse, care worker and expelled from the Labour Party. Emma Runswick, Medical Student Labour Party member and mum slandered by the right of our party on national television. Rhea Wolfson, Labour NEC candidate who was initially blocked from being on the ballot.

Some will look at these events in isolation. We must see them for what they are an attack on our people and the politics of our class. We must defend them in this context. The defence of the individual, whether it is Jeremy Corbyn, or my flatmate, must be a defence of our politics.

Because we need it now more than ever. If we do not stand up, we will loose our schools, our hospitals and our friends. If we do, we can build, win the battle of ideas and transform our society. No one else will do this work for us. We must put the effort in to educate ourselves, agitate and organise in search of a better world.

Comrades. We have work to do, together. 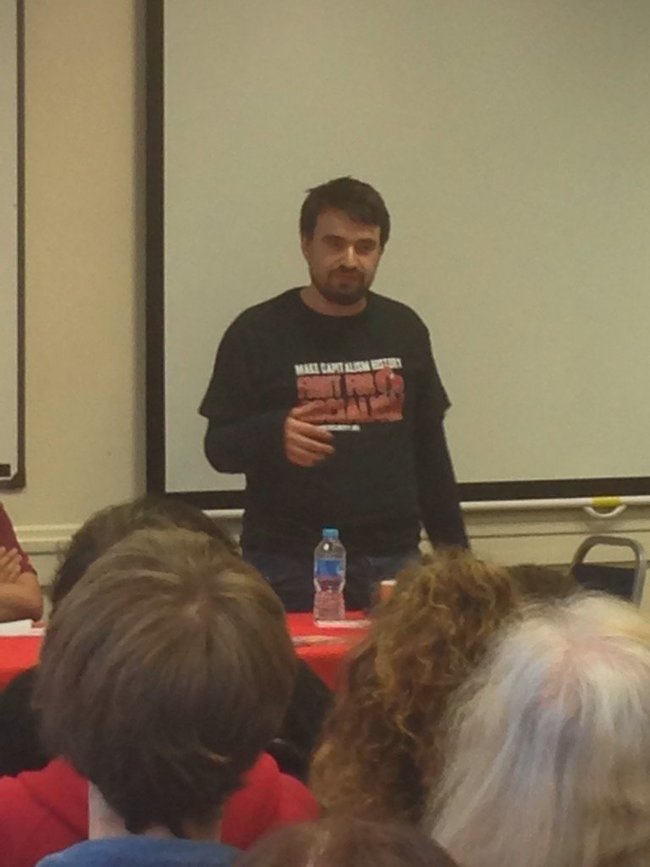 Yesterday NHS employers released the full contract they plan to start imposing on all junior doctors from August 2016. You can read the full terms and conditions here: http://tinyurl.com/j6ce84u This contract needs context to explain why... Continue →